The writing career of travel writer Andrew Hempstead began in 1989, when, after leaving a career in the field of advertising, he took off for Alaska, linking up with veteran travel writer Deke Castleman to help research and update the fourth edition of Moon Handbooks Alaska-Yukon. He has since authored and updated over 100 travel guidebooks that have sold over 800,000 copies worldwide. He also creates content and for a number of high-profile corporate clients and his photography appears in a variety of media worldwide. Here is his story: 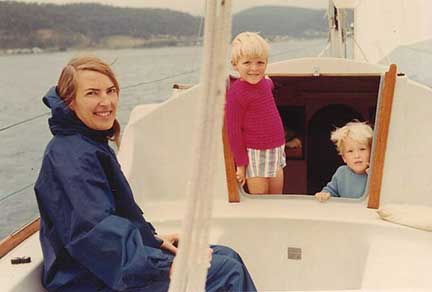 Sailing into the wild blue yonder with my mother and younger brother, 1973.

Both of my parents had travelled extensively before I was born in 1968. My father especially, firstly as a professional golfer, and then as a salvage diver whose work took him throughout the Middle East. My own early memories of travel were sailing and camping trips along the east coast of Australia, but our family also took extended trips through Asia and Europe. Although my brother and I were homeschooled on these longer journeys, it was the travel itself that was most educational. By the time I was a teenager, family travel had been replaced by “surfing safaris” up the east coast of Australia with my friends.

I can’t recall exactly where or why, but in 1989, at 21 years old, I picked up a copy of John McPhee’s book Coming into the Country, about a way of life in Alaska that was completely foreign to me, yet enticing; within a few months I was heading across the Pacific Ocean with my girlfriend to experience for ourselves the Alaska I’d read about. We spent an entire summer exploring the state, spending extra time in the villages of Eagle and Circle, both of which had featured prominently in McPhee’s book.

As is often the case in life, it was a chance meeting that changed the course of my life. That summer in the Alpine Bakery, south of Anchorage, we bumped into a local who had had a number of images published in a guidebook, and when he found out the remote places we’d spent that summer got us in contact with Deke Castleman, the author of an Alaska guidebook published by Moon Publications out of California. Moon’s roots can be traced back to the very same 1971 music festival at Nimbin, Australia, where Tony and Maureen Wheeler (the founders of Lonely Planet) began selling guidebooks. By the early 1980s, Moon had established itself in Chico, California, and its guidebooks enjoyed a solid following with independent travellers that wanted more than the “Lonely Planet experience.” Moon authors were generally travellers who wanted write (rather that writers who wanted to travel), and this was reflected in the guidebooks and their audience.

At the end of the summer of 1990, we were invited down to the Moon offices, and by the following spring were on our way north again, this time with a handwritten contract that covered basic expenses in return for a summer of research that took us to every corner of Alaska. After numerous other guidebook update assignments that followed, I signed a contract with Moon to write my first book in 1993. After two summers of travel and two winters of writing, the Alberta/Northwest Territories Handbook was published in early 1995. It was the first guidebook ever published to Alberta and its research had taken me to, literally, every park and every town (and every small-town museum) in the province, as well as providing me the opportunity to travel throughout the Northwest Territories and what is now Nunavut. It also led me to make a permanent move to Banff, Alberta, where I was to meet my future wife a couple of years later.

In the ensuing years, I continued to update guidebooks and write new ones to British Columbia, Atlantic Canada, Australia, and New Zealand for Moon, and for other guidebook publishers such as Frommer’s, Michelin, Dorling Kindersley, and Odyssey. I also began writing about the regions I had come to know as a guidebook writer for a variety of magazine clients. As the world wide web evolved, I began working for online clients such as Expedia and writing destination guides for airlines and other travel-related companies.

Unlike other guidebook series, the onus on Moon authors has traditionally been to supply images with finished manuscripts. Rather than sourcing photos elsewhere, I began taking photos on my research trips and by default I became a “travel photographer.” For many years, my images were sold through a major stock agency. Over the years my images have been used in hundreds of advertisements, in books, and on graphic products such as calendars.

With the impending birth of our first child in 2004, my wife and I realized that it wasn’t practical for me to continue spending much of the year traveling. One of our ideas was to create books about the Canadian Rockies, but starting a publishing company from scratch seemed somewhat daunting. And so we approached the Steiner family, who had established Summerthought Publishing in Banff in 1971, about purchasing their company. Eventually a deal was struck and we were the proud owners of the only company in the world dedicated to producing books about the region we live—the Canadian Rockies. Summerthought currently has around 30 books in print, and we add three to four new titles annually. 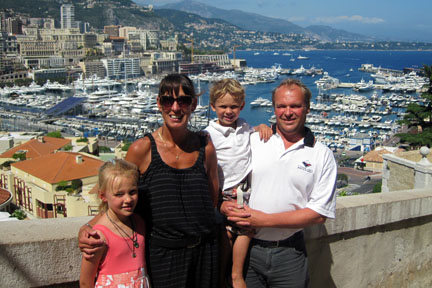 A family vacation to the south of France, 2012.

In the years since the birth of our daughter—and then a son in 2007—I have continued to author or update two to three guidebooks a year and write and photograph for corporate clients such as Travel Alberta and Parks Canada, as well as developing content-based marketing strategies for regional clients. The demise of the Frommer’s print division in 2013 saw the end of a long relationship for me, having authored and updated multiple editions of Frommer’s titles as well as contributing to special projects.

Luckily for me, the Moon series, now published by Avalon Travel (an imprint of Perseus Books, a Hachette Book Group company), has weathered the demise of other guidebook series and has improved their market share in recent years. Additionally, Avalon is the only major guidebook publisher that still pays its authors royalties; with a number of Avalon contracts dating back up to two decades, solid sales allows me to travel extensively for each update.

In 2012, my wife and I opened Mooseprint Books in Banff. Since the closure of the iconic Banff Book & Art Den a few years prior, we felt there was a need in Banff for an independent bookstore. But after two years, we decided that the hours we were putting in didn’t translate into a worthwhile return and in March 2014 we closed the doors to concentrate on publishing, writing, creating travel content, and to spend more time with our children.

In 2018, we purchased Gem Trek Maps from Roger and Donna Nelson. Gem Trek has been a long-time favourite with local outdoor enthusiasts for waterproof hiking maps. 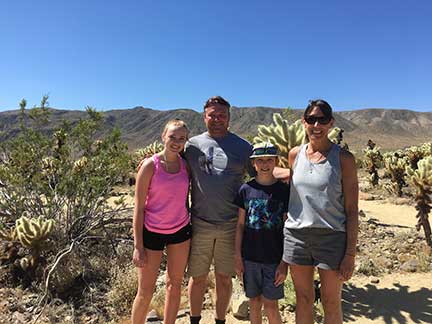 Like my parents before me, I think travel is extremely important for children. Both our children took their first plane trips at a few months old, and now at 13 and 16 have spent hundreds of hours in planes traveling throughout North America and on multiple trips to Europe, the Caribbean, and the South Pacific. As a family we take multiple long-distance trips a year for a mix of work and pleasure, each journey exposing our children to different cultures around the world and feeding their curiosity through experiences that simply aren’t afforded them through the routine at home. That said, our children have also grown to love camping and hiking as a form of travel, and during the short summer season here in Banff, we head out into the surrounding wilderness (or to the warmth of prairie lakes) as often as we can, where, to their way of thinking, spending time in the backcountry is just as interesting as visiting Roman ruins.