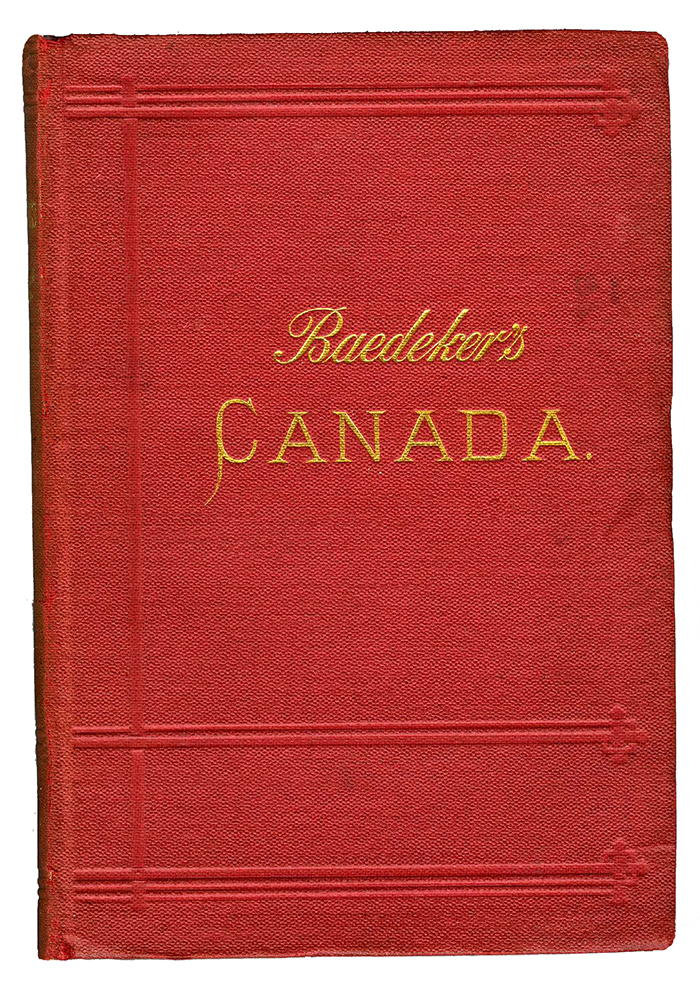 A few years ago, I became interested in finding a copy of the first guidebook written to Canada, and reading firsthand what the author had written about my hometown of Banff, which was a popular tourist destination along the Canadian Pacific Railway as early as the 1880s. The book in question is Baedeker’s 1894 The Dominion of Canada With Newfoundland and an Excursion to Alaska. I subsequently found a 1st edition copy that was in surprisingly good condition.

German-born Karl Baedeker published his first travel guidebook in 1828 and by 1861 had published his first guide in English. These small red books, bound in leather, were incredibly detailed. But they were also forthright and completely politically incorrect. For example, in the Introduction section of the Canada guide, the author states that “Hotels in the smaller towns can seldom be classed as good, while sometimes (as in Nova Scotia) they are decidedly bad.”

The first edition of The Dominion of Canada was written by Scottish writer James Muirhead. Chapters follow the newly completed rail line across the country. The first edition includes 10 maps, which were drawn by Canada’s surveyor general Edouard Deville, including a foldout map of the entire country. It is obvious from reading the text that Muirhead travelled the length of the country in his research. Additionally, he credited well-known names in Canadian history, such as surveyor George Dawson, with help on the manuscript.

In 1894, at the time of the book’s publication, my hometown of Banff and nearby Lake Louise (then known as Laggan) were in their infancies as tourist destinations. But they were both included in the Baedeker’s guidebook. The text for travellers reaching Lake Louise was as follows:

Laggan is the station for a visit to the three Lakes in the Clouds, in the Bow Valley. A road (stage there and back is $2), and also a (shorter) bridlepath, lead to Lake Louise (5800 ft., 2½ M. long and ¾ M. wide, magnificently situated at the base of the stupendous glacier-clad Mt. Victoria. There is a small Chalet ($2½-3, meals 75c) on the bank, where fly-fishers and other visitors may obtain accommodation and camping outfits. One of its striking beauties is the various tints of green it shows in different lights and from different points of view. A visit should be paid to the face of the stupendous Glacier of Mt. Lefroy, 3 M from the chalet and 650 ft. above it. The greater part of the discharge of the glacier enters the lake under the debris of the moraine. A bridle-path has been cut from the chalet around Great Mt., on the left side of Lake Louise, to the base of Mt. Lefroy. From Lake Louise we may walk or ride (1 hr.) to Mirror Lake (so called from its wonderful reflections) or Shadow Lake (6400 ft.), and thence we may walk to Agnes Lake (6700 ft.; shelter hut, refreshments in summer). These lakes lie on the side of Mt. Whyte, to the N.W. of Lake Louise. A fine cascade falls from Lake Agnes to Mirror Lake. The most prominent of the peaks around Agnes Lake are the Beehive and the Devil’s Thumb, a spur of Mt. Whyte. All three lakes are often visited from Banff (p. 207). Lake Louise abounds in small trout, but there are no fish in the other lakes. Full information may be obtained from W.J. Astley, Laggan.

The Dominion of Canada With Newfoundland and an Excursion to Alaska is becoming increasing rare, but there are occasionally copies for sale at Abebooks.