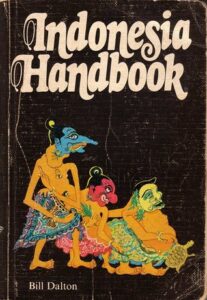 For over four decades, Moon guidebooks have been trusted companions for independent travelers the world over. But the books have evolved greatly–beginning with photocopied notes sold at Australian hippy markets to slick, full colour books distributed worldwide.

One defining feature of Moon guidebooks has always been the author’s voice shining through. Although, maybe for the better, this has been toned down in many ways. It’s hard to imagine now, but as recently as 1998, my observation of a “chain-smoking heifer” managing a Vancouver hostel made its way through the editorial process and into print, and a friend’s house was marked on a small-town Australia map because “the fishing is great out front of his place.”

Moon Publications was born with the Indonesia Handbook by Bill Dalton in 1973. Earlier that year, after seven years of travel, Dalton had found himself at the Aquarius Festival in Nimbin, Australia (a Downunder version of Woodstock). While many festival-goers remained in the area after the festival ended, Dalton headed to Sydney to self-publish in booklet form A Traveler’s Notes: Indonesia, which he had been selling on the streets of Nimbin. Little did he realize that in the ensuing years what had begun as six pages of mimeographed notes would grow into Moon Publications. This book was followed by legendary traveler David Stanley’s guide to the South Pacific, and then in ensuing years books to individual U.S. states.

When I first visited the offices of Moon Publications in 1992, the company was based in Chico, California, and operated under the guidance of Bill Newlin. On that initial trip, I stayed on the couch of a long-time Moon author, whose house was next door to the company’s founder, Bill Dalton, who had run his guidebook publishing enterprise out of this home for many years.

The first Canadian destination covered by Moon was British Columbia, by Jane King in 1989. In the 1990s, Moon was joined with Foghorn and Rock Steves under the Avalon Travel banner. Now based in Berkeley, California, the Moon series is published by Avalon Travel, an imprint of Perseus Books, a Hachette Book Group company.

The story of Bill Dalton’s journey into the publishing world is told on the Hachette website here.

As he always does, Rolf Potts asks Bill Dalton all the pertinent questions in an online interview here.